Posted on by
The Chinese New Year, or Spring Festival, has more than 4,000 years of history and is the longest holiday of the year. The national holiday begins on the first of the Lunar Calendar and lasts until the 15th of the first month. In 2018, Chinese New Year begins on February 16th and ends March 2nd.

There are multiple blessings and greetings for Chinese New Year. The simplest is, of course: “Happy New Year!” (xīn nián kuài lè) 新年快乐

A Dog’s most defining characteristic is their loyalty. They will never abandon their friends, family or work. Honest and just, they are popular in social circles. Everyone needs a Dog friend for advice and help. They are also good at helping others find and fix their bad habits. Despite how they act, they are worried and anxious inside. However, they will not let this stop them. Once they decide on something, no one can persuade them against it.

Anyone born in an earth dog year will be communicative, serious, and responsible in the workplace. 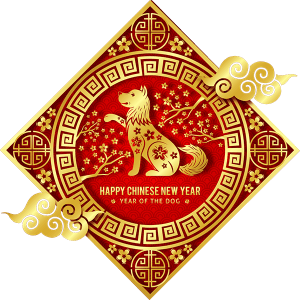 This Chinese tradition goes all the way back to the Northern and Southern dynasties (420-589 AD). In the Song Dynasty (960-1279 AD), everyone would show off their new clothing as they visited friends on New Year’s Day. In the Republican period (1912-1949), beautiful new clothes were needed as the youth paid their respects to the elders. It’s a part of Spring Festival celebrations, just like the New Year’s Eve reunion dinner. You might be able to guess why.

The Spring Festival is a time of change and new beginnings. Practically every activity during the Spring Festival has the purpose of removing the old and welcoming the new. Forget about the misfortunes and be ready for good luck. In addition, new clothes are auspicious and can protect you from evil spirits.

Like the New Year couplets and other decorations, new clothes also add to the festivity. In the past, China was an agrarian society. There was only 1 harvest per year in the north and 2-3 in the south. Throughout the entire year, people scrimped and saved.

What is this magical red thing? Regardless what term you use, 红包 (hóng bāo) are great because they contain money. The money in red envelopes is also known as 压岁钱 (yā suì qián). Literally, it is “money to anchor the year(s).” It is also known as “lucky money” or “New Year’s money.”

By giving the money to children, elders are hoping to pass on a year of good fortune and blessings. Another version is given by the younger generation to their elders as a blessing of longevity and a show of gratitude.

In some regions of China, rather than between generations, married couples will give red envelopes to their unmarried friends to transfer some luck.

According to legends, there was a monstrous creature named Nian (年). Once a year, it would come out of the forest at night and devour entire villages. The steps of protection against Nian during New Year’s Eve transformed into the Spring Festival celebration.

Parents would also give children money that night. This way, the children would have something to bribe the monster or other evil spirits with.

In another popular story, there is a demon called Sui (祟). On New Year’s Eve, it would come and pat children’s head while sleeping. His touch was tainted. To protect their children, parents would stay up the entire night, guarding them.

One couple gave their child a coin to play with. When he fell asleep, they placed the coin next to the pillow. At midnight, an eerie wind snuffed out the candle. When Sui reached for the child, the coin flashed in the darkness and scared him away. The next day, the couple wrapped the coin in red paper to show their neighbors.

Food is one of the things that the Chinese take the most pride in. And of course, lot of care and thought is put into the menu for the most important holiday of the year. As with Chinese New Year activities and decorations, the dishes are created to give blessings for the next year. Both the names and looks are symbols of wishes for prosperity, happiness and auspiciousness.

Though every region (even household) have different customs, there are some common dishes seen on every table:

Even though Cambodia have their own New Year’s Day, they still celebrate the Chinese one. AHouses get decorated with yellow flowers, which are supposed to bring good fortune while Lion and Dragon dancers are performing on the streets. It is considered that the longer the creature is in dance, the more luck it brings to the audience, so people usually give small donations to keep them dance as long as possible.

But if you are a nature lover and want to do things in a different way, the team of Memoria Palace & Resort offers you a different plan to enjoy the holidays with your family, couple, friends...

This is your place and we will be glad to attend you!

How are you planning to enjoy the Chinese New Year?

Posted in eco tourism in cambodia