The Water & Boat Festival will soon be taking place in Cambodia’s capital, Phnom Penh, between the dates of November 21st to November 23rd. Although a celebration to be remembered, in recent years it has been remembered for all the wrong reasons.

In 2010, a tragedy so vast occurred at the Water & Boat Festival that took the lives of more than 347 people and injured nearly 800. You can find out more about the tragedy here.

After tragedy struck, the festival was canceled for the following 3 years. In 2014 the Water Festival started again, however not many people attended, which was a good thing in a way to not cause further tragedies. 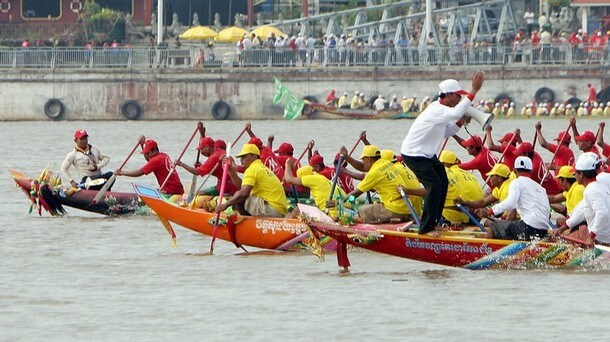 In 2015, the Water & Boat Festival was once again a no go due to the government stopping it. The reason given was that water levels were too low, however local residents disagreed with this and believe it was due to rising political tensions between the ruling party and the opposition party.

After 6 years of no festivities, the Water Festival was finally back on in its former glory with a terrific atmosphere and many visitors from around the country and abroad.

One of the things that make this festival so popular and busy, is the fact that it runs at the same time as the Khmer New Year, which is one of the most important holidays for local Cambodians.
There is a smaller Water & Boat Festival that takes place at Ankor Wat, but for the real thing and 100% of the package, you will need to be in Phnom Penh, the capital of Cambodia.

For those of you that do not know, the Water Festival is called Bonn Om Toeuk in local Khmer.

Apart from great festivities and water sports and the Cambodian New Year, the Water & Moon Festival also ushers in the Cambodian Fishing Season and the turning of the currents in the Tonle Sap River.

If you do attend this stunning event in the Cambodian Capital Phnom Penh, you will also get to watch many upon many fireworks and a new moon rise up, which Cambodians believe brings good luck.

It also marks the reversal of the current in Tonle Sap river. Boat races as well as fireworks displays are held at the river.
Overall you will see over 400 boats being driven along the river by trained oarsmen, fireworks, celebrations, a new full moon and thousands of party goers from across the country. Overall it will sure be three epic nights to remember.

1. Did you know, the Tonle Sap river in Cambodia is one of very few rivers in the world to change the flow of its current in different directions at different periods thoughout the year.
2. The Tonle Sap river leads onto the Tonle Sap Lake, also known by Cambodians as “The Great Lake”.
3. The Water, Boat & Full Moon Festival also brings a full moon to the show, which Cambodians believe is a good omen which provides a bountiful harvest. You may witness many Cambodians giving thanks to the moon.
4. The Chief priest of Cambodia will light a candle and drip wax onto banana leaves. The shape of the melted wax on the leaves is said to predict the growth and harvests of all the country for the next year.
Whether you go or not, from Memoria Palace & Resort, we wish you an amazing Cambodian holidays and we hope to see you soon to get out of the hustle and bustle on the normal Cambodian tourist route and visit the real, wild Cambodia in Pailin where the Cardamom Mountains await an adventure with you.